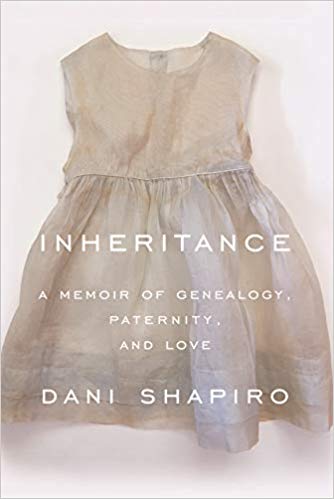 Here’s what been on my TBR pile lately!

Inheritance by Dani Shapiro has been getting tons of press, and deservedly so. This beautifully written memoir is about Shapiro’s discovery – at age 54 – that her father, the father she adored, is not actually her biological father. After taking a DNA test and discovering this, she went on a quest to find her true biological father, and to understand the decisions her parents made in bringing her into the world. Throughout the process, she went down a rabbit hole of discovery, self-examination, and lots and lots of emotions to make peace with who she thought she was, and who she truly is. Engaging and interesting throughout, I recommend this memoir to any and all!

Open Your Eyes by Paula Daly was a swift and satisfying read! Jane and Leon – both writers living in domestic bliss in Liverpool – seem to have an idyllic life, but when Leon is attacked in their driveway one day, Jane finds that Leon not only may not survive, but that there was secret after secret creeping through his life that she was completely unaware of. This novel was super fast to get into, and I liked how the narrative took the reader back and forth on an emotional roller coaster to see if Jane can unravel things while still being grounded in good old suspense. Recommended!

Killers of the Flower Moon by David Grann was all over bestseller lists when it was released last spring, so I’m just super late to the party! This is a fascinating non-fiction account of a piece of history I knew nothing about – the murder of dozens (or more) wealthy Osage Indians in the early 1920s, all due to headrights for oil found on their land. This account also weaves in the burgeoning growth of the FBI (which was in an infancy when this was happening) under J. Edgar Hoover, and how it was critical to finding perpetrators and bring them to trial, though there is a lot of this story that feels unsolved and understood. We’re discussing this in my book club soon, and I think we’ll have lots to say!