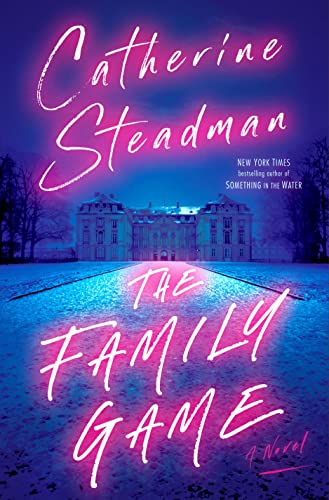 The whirlygig of reviews continues!

First Born by Will Dean was an audio listen, and I was pulled in straightaway by the idea of twins – one dead, the other terrified to be out in the world who has to fly from London to New York City to comfort her grieving parents and try to unpack what happened to her sister. This psychological slow-burn kept me listening!

The Book of Boundaries by Melissa Urban is exactly what it sounds like – and she does such a good job on Instagram (a great follow!) of modeling some of what she lays out here. I’ve learned a lot from her!

Please Join Us by Catherine McKenzie is catnip to me – a secret society of women, shady dealings, a retreat, and women in power who maybe shouldn’t be! Some of the machinations at the end got a bit eye roll-y for me, but overall, I liked the vibe of this audiobook listen and what women will do to level the playing field!

The Cloisters by Katy Hays was a slow, contemplative murder mystery, taking place at The Cloisters, a part of the Met in New York City (which I’d never heard of!). Ann is an intern unexpectedly joining the staff at The Cloisters, researching medieval divination and tarot cards when a murder takes place on the grounds. I love a good research/libraries vibe from a book, but this felt like it just drifted alone, rather than propelling me forward. Too literary for me, perhaps?

Two Nights in Lisbon by Chris Pavone was a lengthy suspense novel (and audio listen) of a woman desperately trying to recover her husband who has been kidnapped while they are on vacation in Portugal. Ariel and John are newly married, and as she tries to save him, everyone discovers they don’t know each other as well as everyone thinks they should. Lots of good twists and turns, power plays, money, scandal and more, but I will say… this felt LONG to me (434 pages), even as an audiobook.

The Family Game by Catherine Steadman was just bananapants, and I was here for it! Harriet and Edward are smitten and heading for the alter, but as Harriet interacts more with his family, things seems to go off the rails. Picture Succession‘s Roy family, weird traditions, near lethal games of survival, and a sweet romance rolled in one. BANANAPANTS.

When We Were Bright and Beautiful by Jillian Medoff was an audio listen, and a rough one at times (trigger warnings for rape, assault, abuse, etc). Basically, if one of the Roy sons from Succession was picked up for rape, and how the family deals with it (not well). Hard but fascinating and compelling, I love a good peek behind the curtain of wealth into the nitty gritty, and this definitely was that.

Now Is Not the Time to Panic by Kevin Wilson… I knew it would be weird based on his previous work, but this weird just didn’t work that great for me. An art poster, a ‘satanic panic’ vibe, two friends… I was initially all in, but just got… bored. Sorry, dude.