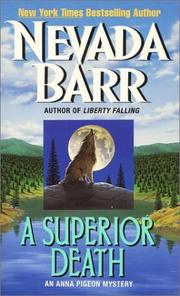 Mysteries ‘Round the World

I like books that let me “armchair travel”, even if I’m hunkered down here in the Hoosier State. Lately, my best book “travels” have been found in mystery novels!

A Superior Death and Ill Wind by Nevada Barr are two books early in one of my favorite series of all time, the Anna Pigeon, Park Ranger, series. I recently decided to reread the series, start to finish, and I’ve forgotten how much I love reading these murder mysteries set in National Parks around the country! A Superior Death features Isle Royale National Park on Lake Superior, and Ill Wind is in Mesa Verde National Park – very different settings! Anna Pigeon is one of my favorite protagonists in literature – flawed, honest, human, brave, and sardonic. I’m so glad to be revisiting these books!

I Am Pilgrim by Terry Hayes is a WHIRLWIND trip around the globe! Pilgrim (one of the names by which we know him) is a shadow of a shadow in our shadowy government, and the only man who can stop a massive terrorist plot being orchestrated by just one man. This lengthy (but fast-paced!) novel whips us from Greece to Saudi Arabia to Afghanistan to the UK, ratcheting up the suspense and fear that something like this could truly happen. No wonder this thriller was on top of so many lists when it was released!

Friction by Sandra Brown doesn’t travel as far, but is definitely rooted in Texas. When Crawford, a Texas Ranger, saves a federal judge in the courtroom, a series of dominos start falling that put both Crawford and judge Holly Spencer in danger – and in each other’s path. Suspense and romance mix in this quick novel from bestselling author Brown.

I also just finished All Dressed in White by Mary Higgins Clark and Alafair Burke. Was the disappearance of a bride five years ago a case of cold feet – or murder? I listened to this solid mystery, and found it a nice addition to my reading list.