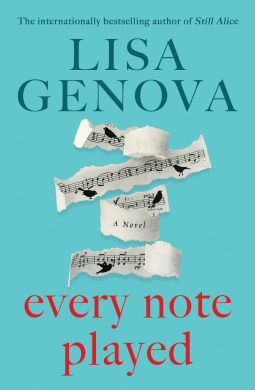 You know how there are some titles that you just can’t forget about for days after you close the page? Maybe the characters stuck with you, or the setting, or the story itself? Those books are hard for me to find, but I’ve had a few lately that have stuck with me in one way or another…

The Lost Girls of Camp Forevermore by Kim Fu (due out February 13th) was definitely a memorable read, more for the way Fu wove the story together (present day chapters and in-the-past chapters)… she kept the reader trying to find all the connections, the reasons for why the girls were the way they were as adults, and what really happened when five young girls took a kayaking trip with their instructor at Camp Forevermore. I thought about this one a lot after I finished it…

Every Note Played by Lisa Genova (due out March 20th) has stuck with me more than any book in recent history, both because in the hands of Genova, illnesses and human struggles are made real, and also because of personal connections to degenerative illnesses. In this one, ALS takes the stage when a 45-year-old concert pianist is diagnosed… and realizes he has no one to rely on as his muscles deteriorate one by one and in quick succession. Seriously… this novel is one I can’t get out of my head. So, so good.

The Great Alone by Kristin Hannah (due out February 6th) is classic Hannah – rich and well developed characters struggling against what life has thrown at them. In the case of this novel, teenager Leni is uprooted by her somewhat unstable father and doormat mother to the wilderness of Alaska to live off the grid. I love an “against the elements” story, and this one fits the bill, while also weaving in romance, growing up, and unhappy endings for some of the characters. Highly recommended!

Force of Nature by Jane Harper (due out February 6th) is her follow-up to the smash debut The Dry, and I really liked this one much better. Five women go into the Australian wilderness as part of a corporate team building exercise, but only four come out. What happened in the woods, and who is to blame? Again… wilderness elements, suspense, and well developed characters. I really dug it!

Surprise Me by Sophie Kinsella (due out February 13th) seems like an odd “stuck with me” pick, but it really did! Adam and Sylvie have been married for ten years, and seem like the perfect couple. But when a well-meaning doctor tells them they have – potentially – another 68 years together, they feel a bit panicked. The story then combines hilarity, real couple struggles, past grief, and coming to terms with your life. I really enjoyed spending time with Adam and Sylvie!

I also read The Scot Beds His Wife by Kerrigan Byrne, who is always a reliable source for feisty, sexy Regency romances! I read Heather, the Totality by Matthew Weiner, and the nicest thing I can say is that it was TERRIBLE. Sometimes I Lie by Alice Feeney was definitely a page turner, though I felt a bit cheated at the end after some super “holy cow!” twists. We read The Twelve Lives of Samuel Hawley by Hannah Tinti for our book discussion, and it certainly led to lively discussion and changed my perception of the book a bit. A good one for discussion!